You are here: Home » Special Guest Reviews and Media » Riding the Dartmoor Derby has been a dream three years in the making for me

Riding the Dartmoor Derby has been a dream three years in the making for me. Some dreams are worth the wait. I finally rode the Dartmoor Derby from September 21-23rd and it lived up to all of the hype and expectations that I had for it.

First, a little background; the Dartmoor Derby was founded by Elaine Prior of Liberty Trails and brings the speed, excitement, endurance, and fun of the Mongolian Derby and luxury of an African Safari to the moors of England. The Derby had a trial run in 2015, and this was the third year Liberty Trails hosted a group of riders on Dartmoor. 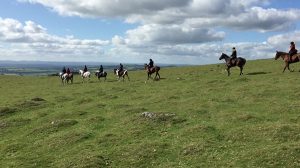 Riders are in groups of eight, and can bring their own horses or hire a hunter-type horse for the ride. We had 22 riders from three different countries this year, forming three different groups. Each group has two local guides, and at least two ground crew members. The guides re-ride the Derby routes prior to the event each September. The plan for the Derby is to arrive on Friday and have a short ride to get to know the horses. Then it’s full days of riding on Saturday and Sunday, and departure on Monday morning. Each year, the Derby is up to 50 miles of riding across Dartmoor.

High winds and heavy rain forced some last minute changes to the Derby this year, but the organizers took it all in stride. They switched the short Friday ride to Saturday, and planned a longer distance for Friday, telling us all to wear our rain gear both days.

I knew we were riding soon after arrival, so was wearing breeches, boots and half chaps, standing outside the train station in Exeter, England. A woman walked up and asked if I was going to the Dartmoor Derby, she and her three friends (all from London) were also headed there. We chatted as we waited for the ground crew. Jules arrived, followed shortly after by Bob. We were still missing three other riders, so Jules took the four that came together in her vehicle, and Bob and I waited for the other three. Jennifer, BiBi and Jodi arrived (hailing from Tennessee and Alabama respectively). They were so funny and I liked them immediately. We drove the 40 minutes over to Princetown talking the whole way, with Bob filling us in on local information, the sights we were passing, and the Derby. 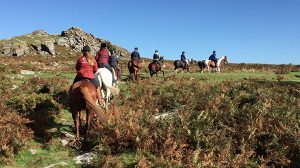 We drove to the barn first. The base camp is at the Dartmoor Prison Farm that is rented out by Neil, a local farmer. We checked in briefly, but needed to drop our luggage and find our helmets, so we drove down to the camp. Camp is in the middle of a field; there are yurts (three people per yurt, in some cases four in a larger yurt for the groups that traveled together), and a dining yurt. Each yurt is named for one of the tors (hills) in Dartmoor.

I picked a bed in my yurt, grabbed my helmet and headed back to the Land Rover. We drove up to the barn, were assigned our teams, and given a ribbon to wear with our team color. I was on the orange team, led by Rachel and Lucy. My fellow team members were the four women from London (Heidi, Kim, Emma, and Kristina), my yurt mate Catherine from Cornwall, and Emma from Cotswolds, who was riding her third Dartmoor Derby.

Friday and Saturday of the Dartmoor Derby

My horse for the weekend was Wilma, an Irish Hunter mare owned by a gentleman from one of the local hunts. The wind was blowing and we were off riding. The scenery was stunning. Words and pictures can’t truly do it justice; it’s something that needs to be experienced in person. 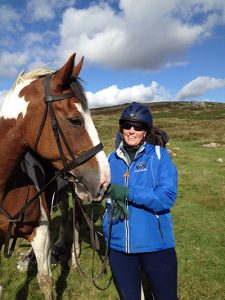 From Swiss mountains to Devon moorland

You can find out more about which cookies we are using or switch them off in Settings.

This website uses cookies so that we can provide you with the best user experience possible. Cookie information is stored in your browser and performs functions such as recognising you when you return to our website and helping our team to understand which sections of the website you find most interesting and useful.

Strictly Necessary Cookie should be enabled at all times so that we can save your preferences for cookie settings.

If you disable this cookie, we will not be able to save your preferences. This means that every time you visit this website you will need to enable or disable cookies again.